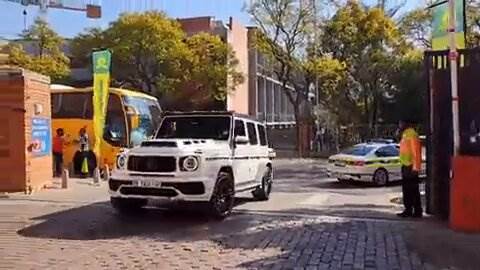 Bongani Zungu was unveiled as a new Mamelodi Sundowns player on Saturday and the player arrived alongside club president Tlhopane Motsepe in a top-of-the-range BMW! Here's a look at his grand arrival.

It was perhaps no surprise to see the playmaker make a return to his former side as it has long been speculated that the move would happen after Ben 10 saw out the remainder of his contract with French outfit Amiens.

Zungu received one of the warmest welcomes any player could get as he was unveiled in front of a packed Loftus Versfeld Stadium with no less than 40 000 people in attendance.

Before he entered the ground, the former Rangers stars arrived in the same car as the club president, which was a stunning BMW M760Li xDrive Sedan worth at least R3 540 000, according to the German automaker's official website.

The number plate of the car has the name "Downs" suggesting that the executive ride belongs to the club or Motsepe Junior himself.

Nevertheless, the vehicle is a definite jaw-dropper is it boats a flowing silhouette which speaks to its world-class sophistication in the luxury car category. Considered to be a limousine due to the fact that it is meant to be a chauffeur-driven luxury vehicle that transports rich and high-profile individuals like Zungu and the Masandawana chief.

It was not the only car on show as a stunning Range Rover and a Mercedes G-Wagon completed a convoy of luxury wheels arriving at the venue. We suspect that it may have been Zungu's family traveling on one of the rides as it would be unimaginable that the player was all there without his loved ones.

Will Zungu shine on his return to the PSL?