In what could've been the last meeting between the two football giants Cristiano Ronaldo and Lionel Messi, here's a look at some of the amazing scenes between the Portuguese superstar and other galacticos such as Sergio Ramos, Neymar, and Kylian Mbappe on Thursday night.

Ronaldo and Messi's potential final clash lived up to the hype, as both superstars got on the scoresheet during Paris Saint-Germain's exhibition friendly against the Riyadh All-Stars, a team comprised of Al Nassr and Al-Hilal's best players.

The Argentina captain, who recently won the 2022 FIFA World Cup in Qatar, opened the scoring just three minutes into the match after a delightful assist from Neymar. His rival responded with a goal from the penalty spot just 30 minutes later to level the score.

Marquinhos scored PSG's second before Ronaldo equalised once again for the Saudi Arabian side in the first-half stoppage time, as the two teams couldn't be separated heading into half-time. In the second period, the Parisians were the quickest off the mark, as Ramos converted a tap-in after a brilliant piece of skill by Mbappe, who laid an assist.

The action-packed match would later end with a 5-4 scoreline in favour of the French champions, with further goals by Mbappe, and Hugo Ekitike ensuring the result.

Read: WATCH: Ronaldo gets splashed all over R87bn momument

With the fixture serving fireworks, fans were marveled at the scenes on the pitch, as Ronaldo got to meet some old friends and foes. After shaking hands at the beginning of the match, the two later interacted on the pitch, in a brief conversation that many fans would love to hear.

Scroll through the gallery below to see Ronaldo's interaction with galacticos 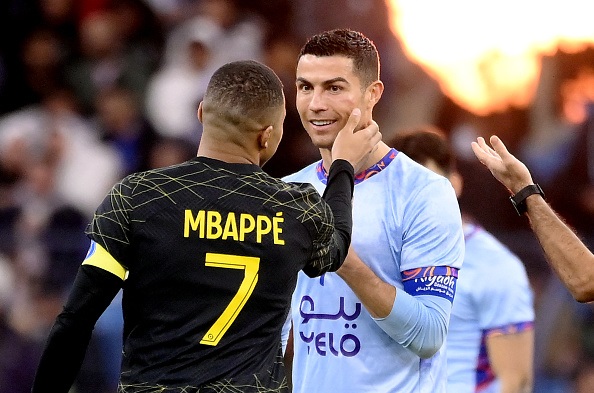 How would you sum up the Messi-Ronaldo rivalry?