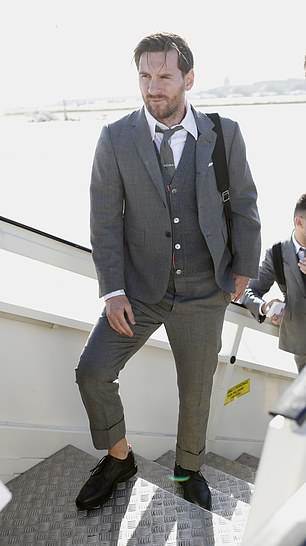 All images sourced from Diario AS

Paris Saint-Germain star Lionel Messi arrived in Argentina in stunning fashion as he was spotted with a £7 000 (R136 336) outfit. Check it out!

The Argentine is one of the highest-paid footballers in the world with an annual wage reportedly in the region of €35 million (R566 million) excluding his bonuses and compensation for image rights. A yearly salary this big allows the seven-time Ballon d’Or winner to be able to purchase anything he wants, including his ridiculous list of luxury rides.

However, on the football pitch, the South American has endured a difficult time at his new club with the star being booed by sections of the PSG support during a match against Bordeaux following his side’s UEFA Champions League exit at the hands of Real Madrid.

Scroll through the gallery above to see Messi's R136k look

It may be a refreshing break for the star as he arrived in his home nation with a smile on his face but it was his expensive outfit that caught the eye.

Read: Ekstein slips on some Gucci

Messi had growth hormone deficiency, which was stopping his normal growth rate at the tender age of 11. Most importantly, his parents couldn’t afford his treatment of $900 (R13 278) a month.

What do you think of Messi’s look?