Cristiano Ronaldo recently showed off his latest Bugatti that is reportedly worth R168 million! With that said, here are the elite small group of footballers who also own a car of the same brand.

The Bugatti brand is one of the most expensive cars in the world and only the biggest names in football can afford this ride. According to moneyinc, the luxury car label was founded by Ettore Bugatti over a hundred years ago in 1909 in France.

Since then, the brand has developed a reputation for having some of the most unique car designs ever made and Ronaldo recently got one of them in the form of a special edition Bugatti Centodieci that only ten people own.

Scroll through the gallery to see the stars who own Bugatti's

Another star who owns a ride from the same car brand is Samuel Eto'o who has been pictured in a 2013 Bugatti Veyron which is valued at R10 million. This is just one of the rides that the Cameroon icon owns as part of his £4 million (R81 million) fleet of rides.

Speaking about collections, Karim Benzema is known for only having stunning rides and one of his best is his Bugatti Veyron which is reportedly worth £1.5 million (R30 million). Although this car is quite pricey, the star should be able to comfortably afford it as his salary is believed to be in the region of £166 000 (R3.3 million), according to Sportekz.

Other stars who have a Bugatti include Barcelona legends Andres Iniesta, who owns a R36 million ride and Ronaldinho's Veyron which is definitely eye-catching, to say the least.

What do you think of their rides? 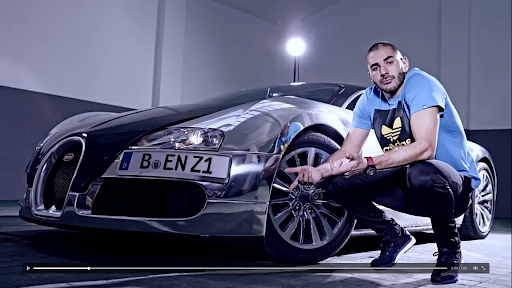