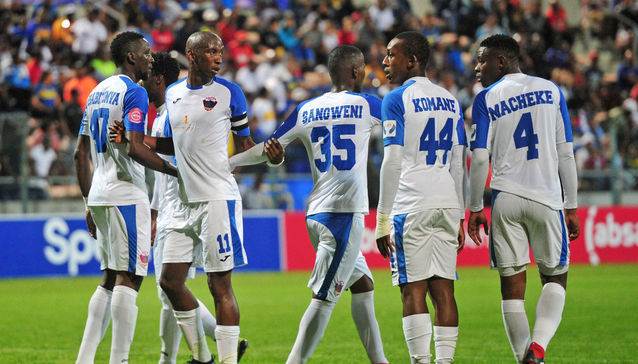 The victory, which was new Chippa coach’s Clinton Larsen first match with the club after replacing Joel Masutha, snapped an 11-game winless streak in all competitions.

"Last time we won a game it was in October last year. I mean, also having a new coach is difficult for players, but having Larsen also helped because he is a good motivator. He is a good coach anyway, he is like the other coaches. It's just that [in the past] we were missing a lot of chances you know. There's nothing much different. I can't say this coach or that one is not good, actually they are all the same. Sometimes they are only different in how they approach the game. Even us the players, we had a meeting and talked about the team's position, and that we have to start winning games, and we have to start to believe in ourselves you know. Because even in the Maritzburg game the confidence was high. Everyone was playing there. We created a lot of chances in the game, which showed everyone wanted to win you know. That was something lacking from the players, we lacked confidence. On Saturday we showed we want to win games and I was there as a captain to lead the guys. Obviously as a captain you must have a good game. We are brothers you know; we are helping each other. That's why our game was so good.

Mbenyane revealed what Larsen told them after he signed a short-term contract with the Chilli Boys .

"He [Larsen] also told us that, 'I took this contract because I could see potential in you players. I don't understand why you are losing games'.Then that was another thing that motivated us and made us realise that actually we are good players. The only thing that was not there was to push more hard you know. Because I think in the past games we weren't pushing that hard as players, but Larsen kept telling us 'you are a good team, you don't deserve to be second last in the log'. We can beat any team that comes up against us. Even at training we were buzzing, everyone was working, everyone was happy with Larsen you know. I think most of the time we lacked that brotherhood. But now that brotherhood is back, everyone is working hard. Even the other players who are not even playing, sitting on the stands ... everyone wants to play. Every day in training everyone puts 100 percent. Ja, Larsen, I think he is a good motivator. He is straight forward; he will tell you where you lack. Our team is ready now to fight you know. We are sorry to let our supporters down because we were about to lose a lot of supporters, because supporters would have ended up not attending our games. It was difficult to drive to the shops because people, they will start to have talk. ‘Hey you guys are losing, what's wrong?' Then you have to explain to them. Then the next two games against Baroka, Free State are very important. They must come and support us because we need them all the time."

Chippa are 15th on the Absa Premiership log with 15 points from 18 games – level on points with AmaZulu, and a point behind Free State Stars and Baroka.