April 2019 edition of KICK OFF Magazine on sale! 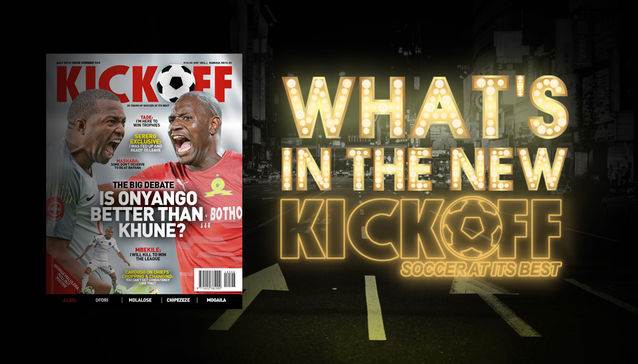 The raging debate over who is the best goalkeeper between Denis Onyango and Itumeleng Khune has already taken social media by storm and is the cover story for the April edition of Kick Off magazine, which is now on sale.

Kaizer Chiefs gloveman Khune has dominated on the domestic front while his Mamelodi Sundowns counterpart has won a pile of trophies and been voted the best in Africa in two of the last three years. Is Onyango better than Khune? Find out what the experts think.

Orlando Pirates utility player Asavela Mbekile opens up about his journey which started with the player failing trials at Ajax Cape Town to winning the CAF Champions League with Sundowns.

Kaizer Chiefs defender Daniel Cardoso is one of the most consistent players in the league without getting the recognition. The 30-year-old talks about this season and working with new coach Ernst Middendorp.

Sundowns’ Emiliano Tade has won more trophies and scored more goals in his career than any player at Chloorkop. However, the Argentine has a fight on his hands to establish himself at the club where he is also hoping to win trophies at the same rate he did with Auckland City in New Zealand.

Here's what's in the new magazine:

Khune vs Onyango
“They are both keepers that will win you games and bring you 10-15 points every season.”
The debate has raged over who is the better goalkeeper, Itumeleng Khune or Denis Onyango. The experts weigh in...


Asavela Mbekile
“I told Rhulani [Mokwena] that I missed how we used to train at Sundowns because his training sessions were always intense and always worked towards the plan of the game.”
The versatile Orlando Pirates star is looking to make his mark with The Buccaneers.

Daniel Cardoso
“Every game there was five or six players changing and you can’t get consistency like that.”
Cardoso has been the catalyst for an improved defensive display form Kaizer Chiefs this season... but still wants to achieve more.

Emiliano Tade
“I’m here to win trophies.”
After his big step up from AmaZulu to Mamelodi Sundowns, Argentine forward Tade is looking to solve The Brazilians’ striker woes.

Shakes Mashaba
“I don’t want to talk about my achievements in the national team, but some are getting another bit, yet they don’t deserve to be there.”
Veteran coach Mashaba is back in club management and back to his roots in the South African second tier.

Richard Ofori
“I respect Sundowns a lot because if it was another club they wouldn’t let me go like that.”
Maritzburg United may have struggled this season, but Ghana international goalkeeper Ofori has been in top form.

Thulani Serero
“I don’t feel like I have something to prove because they know me as a player, they know what I can do.”
The usually media-shy Serero shares his thoughts on his career to date, which has seen plenty of ups and downs.

Elvis Chipezeze
“When you are from the small towns it’s difficult for you to break into the PSL there.”
The Baroka FC gloveman is following in the footsteps of his idol, who has also been a leading star in the Premier Soccer League.

Chris David
“We have set big goals as a team and we have the quality to achieve them. I really want to be part of that.”
Dutch junior international David is ready to lift Cape Town City to silverware and win a move back to the English Premier League.

Stan Matthews
“You get R10-million for winning the league so how can you spend that on one player?”
The long-time SuperSport United CEO is plotting the club’s path back to the top of the pile in the Premier Soccer League.

Shaune Mogaila
“It’s about dedication and commitment. Never give up on your dreams because anything is possible.”
The Highlands Park winger has had an excellent start to his top-flight career and looks to have a big future in the game.

Siph Mdlalose
“I know that my performance since then has not been up to the standard expected of me.”
Young winger Mdlalose has yet to live up to his potential after signing a professional contract at English Premier League side Southampton, but has not given up on his dream.

Where are they now?
“When I got to Cosmos, they were eating KFC for pre-match meal and professionalism was not there.”
Former SuperSport United midfielder Seuntjie Motlhajwa reveals the ups and downs of his time as a professional footballer.

Amajita
South Africa reached the second round of the FIFA Under-20 World Cup in 2009 – but what happened to the players in that squad?

My Dream Team
Former Orlando Pirates star Helman Mkhalele picks his Best XI from his teammates during his illustrious career.

Secrets of the Stars
Chippa United defender Frederic Nsabiyumva reveals some interesting facts about his life.

And lots, lots more! Get your copy nowin store!