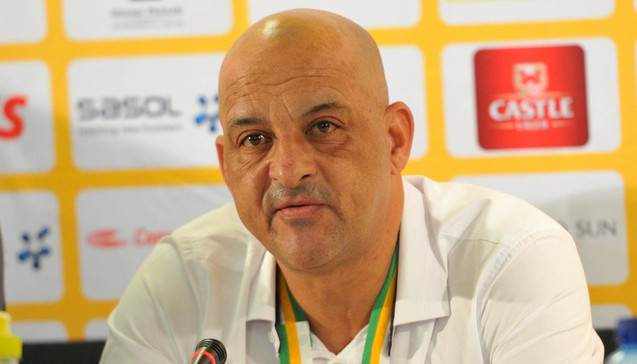 The current South Africa national squad assembled by Da Gama has a mixture of youth and experience, with six players set to make their debuts for the national team.

After this weekend’s game, Bafana will face Angola next week Tuesday in East London in another friendly tie, with the focus on the upcoming African Nations Cup qualification campaign, which starts in June, as well as the resumption of the World Cup qualifiers in August.

Da Gama, who is only set to take charge for those two games while a full-time head coach is found, saw first hand the quality of the squad in yesterday's practice match against PSL side Golden Arrows, which Bafana won 1-0.

"What I saw against Golden Arrows was just breathtaking, it was just unbelievable. I haven't seen players, in a long time, play the type of football and combination play that they exposed on the day," said Da Gama.

"I was very excited. But once more the massive, massive, massive [selection] headache when such a lot of players are performing so well on the same stage, so it's actually a good headache.

"If there's one headache that you want it's the one that we, the technical team, currently have. But it's really exciting looking at the future of Bafana Bafana, looking at the spirit in the team and whether the guys have behaved and performed so far.

"So we are really looking forward to the game [on Saturday] and we can assure you it's going to be an exciting performance by the boys."

The Portuguese colony of Guinea-Bissau, nicknamed the Wild Dogs, were part of AFCON 2017 in Gabon, making their first entrance in the tournament after numerous pull outs due to various reasons, and even held hosts Gabon to a the draw in the opening match of the competition.

Even though Guinea-Bissau finished bottom of the group, they raised many eyebrows, and Da Gama knows his side will be put through their paces against the team.

"I think Guinea Bissau is one of the countries that want to prove that they are going to places, that they are in resurgence and you know they're trying to make the name for themselves," added Da Gama.

"I think they caught many people by surprise in the AFCON for the performances and they want people to take a note of them, and that is the impression we get, so I think they've come to do the business here.

"They are not going to be push overs. As low as the ranking is, I think they really mean business and you can, in my experience and being part of Bafana, you can never underestimate any African country.

"You can see the resurgence of Burkina Faso, so they are just absolutely fantastic.

"I think they'll not be push overs but they'll come at us big time."