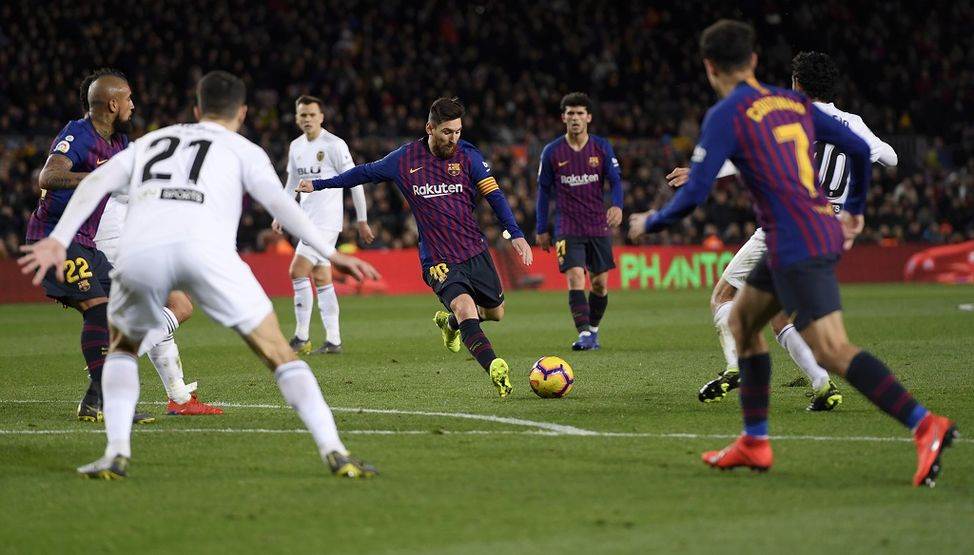 Los Che nearly stunned the hosts after Daniel Parejo forced a low save out of Marc Andre Ter Stegen, with the rebound shot from Denis Cheryshev hitting the face of the post.

The Catalans, fresh from a 6-1 thumping of Sevilla in the Copa del Rey, shrugged off the rusty start and tested the resolve of Neto with a curling shot from Philippe Coutinho on 12 minutes.

With 24 minutes played, a swift counter-attack ended with Rodrigo picking out Kevin Gameiro, who made no mistake from six-yards out to silence the home fans.

Barca received a penalty of their own soon after when Nelson Semedo was adjudged to have been brought down by Antonio Latorre. Lionel Messi duly slotted away the spot-kick for his 20th league goal of the season.

Marcelino Toral introduced his first change four minutes before the interval when the highly-rated Ferran Torres came on for Gameiro, who had suffered a knock to the head earlier in the game.

Barca pushed an equaliser in the final minute of added time, but Roberto rattled the frame of the goal from inside the box with Neto well beaten.

Ernesto Valverde looked to maintain their momentum to get the equaliser and introduced Jordi Alba for Semedo following the resumption.

Neto came to Valencia's rescue once again when his one-handed save kept out a left-footed shot from Messi as the Catalan giants upped the tempo.

However, the Brazilian was left stranded on 64 minutes when Messi took control of a low ball to beat the Valencia shot-stopper with a left-footed finish from outside the box.

Barca were in the ascendancy from then on but despite dominating all the possession, the likes of Messi and Luis Suarez were unable to weave their way past the Valencia defence.

Valencia were able to see out the latter stages of the second half to claim a valuable point on the road, while the point sees Barca move six points clear of Atletico Madrid.