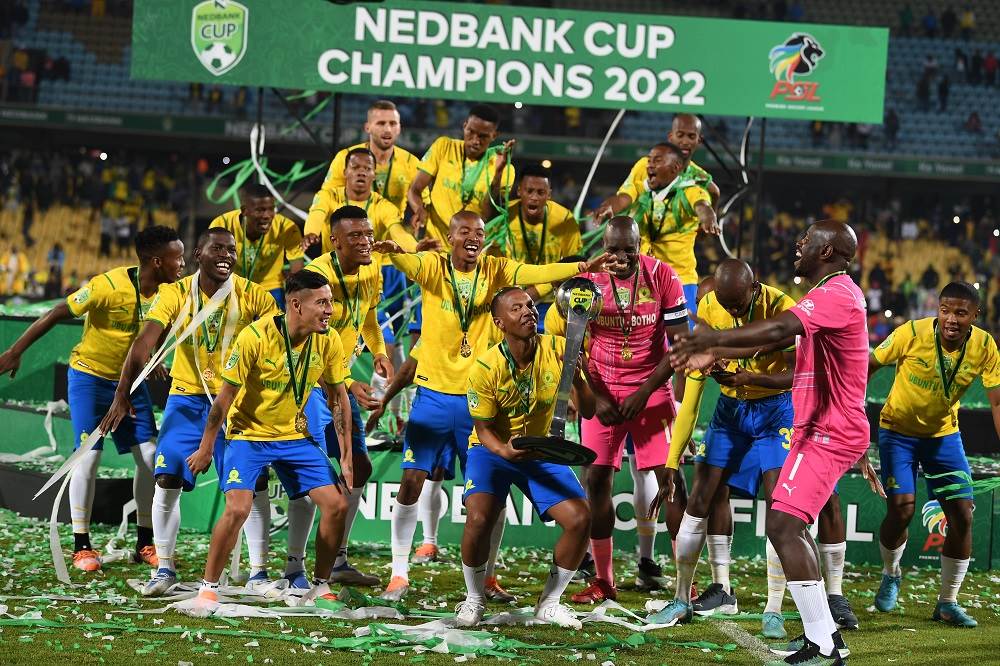 Mamelodi Sundowns have been crowned Nedbank Cup champions for the 2021/2022 season after defeating Marumo Gallants 2-1 in extra-time.

The Brazilians had captain Andile Jali and Brian Onyango back in the fold following the win over Royal AM, as Gallants dropped Sede Dion to the bench and afforded Sibusiso Sibeko a rare start.

It was a fast start from the Brazilians as Gaston Sirino stung the gloves of goalkeeper Washington Arubi with a thunderous shot from way outside the six-yard area.

Masandwana did have the ball in the net through a pin-point strike in at the near post by Sirino with 20 minutes played, but it was disallowed due to an infringement in the build-up.

The Brazilians eventually broke the deadlock three minutes after the half-hour mark when Peter Shalulile pounced onto a loose ball and slotted into the far corner after Arubi's error.

Bahlabane Ba Ntwa targeted a swift response later on, but Katlego Otladisa wasn’t able to head home Sibeko’s smart delivery, as the defending champions ended the first half without a shot on target.

Sundowns remained on the back-foot in the earlier exchanges of the second period and introduced Themba Zwane for Sirino and Sphelele Mkhulise for Kutumela in an effort to regain momentum.

However, Gallants still found a way in and levelled after Dion popped up unchecked in the box and headed in from close-range in the last 15 minutes with hint of an offside waved away.

The Brazilians aimed a quick turnaround in the latter exchanges through efforts from in particular Shalulile and Neo Maema, but it wasn’t to be and extra-time followed.

After an even first period of extra-time, Gallants were reduced to ten players as Ndlondlo got a red card for a second bookable offence whilst Sundowns pushed for the second.

The winning goal came in the final minute of extra time after Thapelo Morena combined with Themba Zwane to slot into the bottom corner and fire the Brazilians to the Nedbank Cup and a domestic treble.

Next on KickOff
Sundowns tipped as huge Nedbank Cup favourites