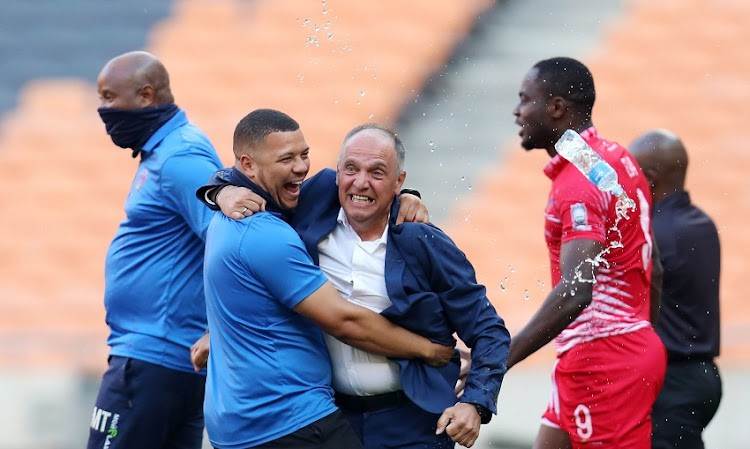 Veteran head coach Vladislav Heric reveals the secret behind his favourable record against giants Kaizer Chiefs while predicting another win for his former side.

Chiefs travel to the Nelson Mandela Bay Stadium on Saturday to do battle for three points with the hosts.

AmaKhosi need the points to keep pace with the chasing pack while Chippa wants to cushion themselves from the drop zone with temperatures rising behind them.

"I believe Chippa will have a positive result in this game," states Vladislav Heric without hesitation speaking to KickOff.

"I believe Chippa have that fortune to play Chiefs and Kurt Lentjies has no fear or worries which is good for any coach. Kurt Lentjies was an intelligent player, and it is showing in his way of coaching so I believe he will find the right formula to have a positive result. I believe in Kurt Lentjies as a coach. He is a good man as well," says Heric.

The Serbian was in charge at Chippa United the last time they beat Chiefs a year ago with Bienvenu Eva Nga scoring the decisive goal.

The Serbian was also in charge when Chippa humiliated Steve Komphela’s AmaKhosi 3-0 in April 2018 illuminating the spark of fires that led to the former Bafana Bafana captain’s sacking two weeks later.

While at Black Leopards in 2012, Heric also downed Chiefs under Vladimir Vermezovic leading to VV's sacking one game later.

"I like those kinds of games and challenges because I have never feared my opponents even when I was a player. It doesn’t mean I don’t respect all other clubs because I respect every opponent that I come up against.

"I’m always excited for that stage against the big teams.

"The week leading to such a game is different because the players are much more loyal to your tactics in that game compared to other matches. They (players) believe in the game plan and stay loyal.

"The players play a major role in that because the tactics are easy to prepare since everyone knows everyone.

"The tactical job is not difficult on the day against your opponent even though you will never know what could happen on the day of the match. There is always something that you cannot predict.

"I have been fortunate in Chiefs games that players stayed loyal to the tactics.

"The plus is that players have no fear in losing the game and this is always the advantage for every coach at every so-called small club," says Heric.