Hunt, who has won four Absa Premiership titles as well as four cup trophies in his coaching career, is currently taking a break in Plettenberg Bay following the end of the 2019/20 season.

The former Bidvest Wits and SuperSport United coach is being strongly linked with the vacant job at The Village along with Adel Amrouche and other more familiar names.

But McGregor, who is widely regarded as one of best strikers the club ever had back in late '80s and early '90s, says the other problem at Chiefs is the playing personnel.

Chiefs are unable to sign players until at least July 2021 unless their FIFA transfer can appeal to the Court of Arbitration for Sport is successful.

"Well it's hard hey, because if you bring a foreign coach it will take too long and with the ban on buying players, it's difficult for whoever comes in," McGregor tells KickOff.com.

"But for me you either gonna say you gonna get someone who plays with flair or anything, or we gonna look for a coach who's gonna win something for us.

"I don't know the [potential new coach] list yet but speaking of Gavin Hunt, for me if they wanna win something he's the ideal guy because he gets the best out of players.

"The only thing is, you are not going to do it with the flair or the Chiefs way [if Hunt is appointed] if you wanna call it that. So you gonna look at what's good and what's not good.

"Ja, I think he's the best coach available at the moment. He knows how to win, he's won trophies, he knows how to do it. So ja, if you wanna win something he's the right guy, he gets the best out of players.

McGregor was asked if he thought the players who are currently at Chiefs will suit Hunt's style of play.

"Nah. Doesn't suit the style of Gavin," he admits. RB - Greg Jakoby (no photo available, McGregor pictured) - He wasn't the most gifted footballer but the heart he had and the way he made players play, the way he crossed the ball. GK - Wade du Plessis - He was a very good keeper who got injured at the wrong time, great hands, very good distributor, great shot-stopper and wasn't scared coming out for crosses. LB - Gardner Seale - A quiet man, but on the field he was in a different class. He would tackle, go up and down the wing, cross in. 'Six Studs' Seale, never wore any other boots. CB - Mark Tovey - He could read the game and head the ball. Quick off the mark in reading the game. CB - Jack Chamangwana - He was also in a different class. Very cool, calm and collected. He led by example. CM - Donald Khuse - When I played with Ace Ntsoelengoe he was near his end so it's got to be the smaller Ace, Khuse. He had all the vision and created all the chances. RM - Doctor Khumalo - Got to be the 16V. The one and only Doctor, we all know about him. Great player, true gentleman. ST - Fani Madida - Obviously his pace and everything. ST - Scara Thindwa (pictured playing for Kaizer Chiefs behind McGregor in the background) - The Swazi international, he was brilliant. 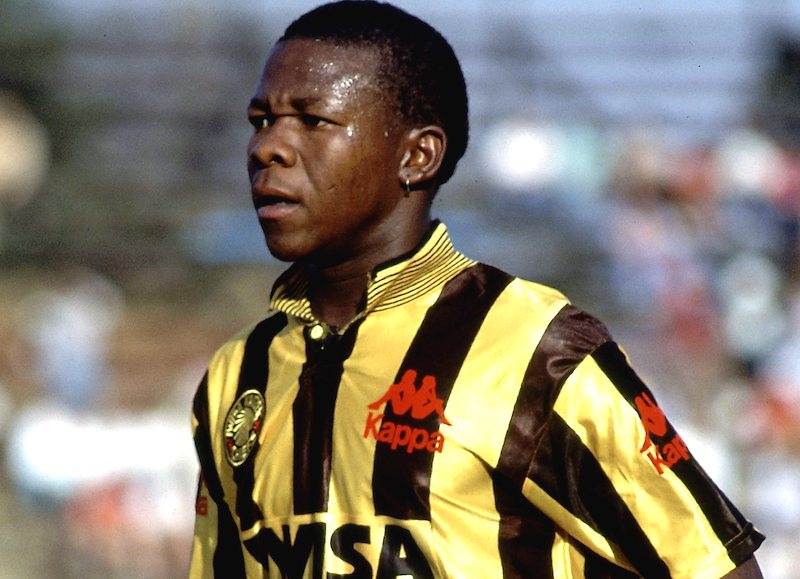 LM - Shakes Kungwane - He had so much vision the way he passed the ball. He was one of the characters of the game. A brilliant player, but his career was cut short by a bad injury. CM - Wellington Manyathi - He did all the hard work and made it easier for the other midfielders because he did all the tackling and everything.
Next on KickOff
SuperSport United confirm latest striker addition