The October edition of KICK OFF Magazine is now on sale! 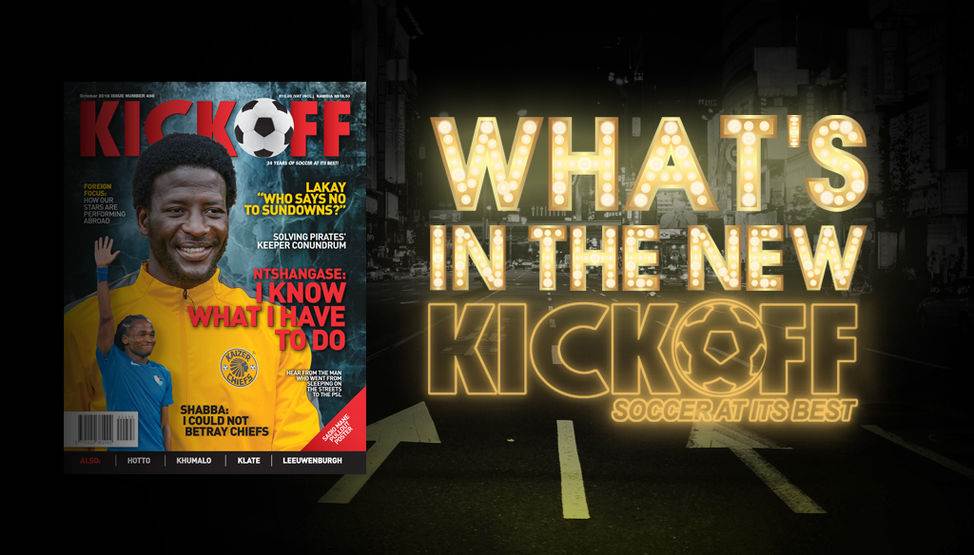 Kaizer Chiefs’ Siphelele Ntshangase looks like a player reborn this season, as he acknowledges his new role in the team, while we also hear from his current and former coaches who give their opinion on his progress so far.

We then chat to Mamelodi Sundowns new signing Lyle Lakay on his switch to Chloorkop, his positional change and what he hopes to achieve, before picking the brains of new Orlando Pirates goalkeeper coach Andrew Sparkes, who reveals his conundrum in picking a first-choice gloveman this season.

Further afield, we chat exclusively to stalwart Siphiwe Tshabalala, who opens up about his move to Turkey, previously failed trials and good and bad times at Kaizer Chiefs.

From the decorated career of Daine Klate, Bongani Khumalo’s rollercoaster ride to Europe and back and Deon Hotto’s ever-presence on the pitch, to Bongani Sam’s unbelievable journey to the top, Peter Leeuwenburgh’s incredulous story from unemployed to semi-final hero in under two months and a report card on South Africa’s best player’s abroad, there’s definitely something for everyone, and lots to digest from this month’s jam-packed edition.

Siphelele Ntshangase
“There is no doubt he will reach super star status. He can still go and play in Europe.”
The midfielder looks reborn in the number 10 jersey this season and is tipped to enjoy a successful season, with the player himself acknowledging what he has to do to achieve just that.

Siphiwe Tshabalala
“It’s a new chapter in my life – there’s a new script I need to write.”
The Kaizer Chiefs stalwart has finally earned a move abroad, and opens up about the surprising switch and the difficult end to his career at Naturena.

Lyle Lakay
“I think at the moment Sundowns is one of the best in Africa, not just in South Africa.”
The versatile new Mamelodi Sundowns man talks about his positional switch and settling into his new surroundings at Chloorkop.

Pirates’ goalkeeper conundrum
“We need someone who can step up and say, ‘I want to be the number one goalkeeper’.”
New goalkeeper coach Andrew Sparkes talks about solving Orlando Pirates’ perennial problem and his role in bringing stability between the Bucs’ posts.

Daine Klate
“No matter how much you think you have planned and invested, you can never really be prepared for life after football.”
The decorated PSL veteran is thinking ahead following his move to Chippa United, but remains determined to make an impact in Port Elizabeth.

Bongani Sam
“When my friends were out drinking or doing crime, I’d be at the field playing football.”
The Nedbank Cup Ke Yona product has paid his dues, rising through the ranks as he finally gets his chance to shine in the big-time with Bloemfontein Celtic.

Bongani Khumalo
“At the age of 23, I was sitting in a Tottenham Hotspur dressing room and David Beckham was sitting next to me.”
Back at SuperSport United for a third spell, the well-travelled defender open sup about his experiences in Europe and the challenges of readjusting to PSL football.

Jozef Vukusic
“What was important for me in my discussions with the chairman was that the philosophy and ideas that we shared were the same.”
The new Polokwane City coach describes his unique journey to South Africa, and what he hopes to achieve with Rise and Shine.

Deon Hotto
“In Europe they play more games than us, but they never complain about fatigue.”
The Bidvest Wits recruit shares his secrets to success following his impressive feat of featuring in every league game over the past two years.

Peter Leeuwenburgh
“I just want to be happy again. I wasn’t that happy last year.”
It’s been a literal fairy tale ride for the Dutch goalkeeper, who went from being unemployed to Cape Town City star in the space of two months.

Siyanda Zwane
“Before I went to Sundowns, all I knew was playing Mandoza before games.”
The decorated Golden Arrows defender’s career has come full circle as he discusses his rollercoaster ride through relegation, championship glory and back again.

Players Abroad
“Maybe he has moved two steps back, but it could be a chance to take one big step forward later on.”
We shine the spotlight on South Africa’s best exports at present, as two former overseas-based stars weigh in.