Ntseki appears to have lost the support of many South African football fans judging by online comments after failing to win any of the friendlies against Namibia and Zambia a few weeks ago.

And with two vital AFCON qualifiers against Sao Tome and Principe in the next few days, the pressure on the coach to deliver has never been higher.

Somebody who has been in the same hotseat before with a greater degree of success knows what Ntseki is in for if he doesn't produce a winning team very soon.

Like Junior Khanye before him, Mashaba admits Ntseki's squad selection for the two friendlies didn't make too much sense with such important matches coming up.

"I want to remind people again that national teams are not a development team. You don't develop there. You bring people who are coming to perform," Mashaba tell KickOff.com.

"I accept if you are talking about widening the base, but not with amateurs. We mustn't make an excuse of saying we lost because we played so-and-so. We need to make sure that when we bring players it's people who have got hunger, people who want to succeed, people who want to win." LB - Sifiso Hlanti - Has the same qualities as Nzama giving numbers going forward and also a good header of the ball. Quick in switching from defending to attacking and vice versa. LCB - Fabian McCarthy - Strong and intelligent like Booth and solid in the air. Fabian could carry the ball forward giving numbers in attack. Good at switching defence into attack. RCM - Patrick Mbuthu (Vice-Captain) - 'Ace' was a complete player, good in combats, winning the ball in the air, but also creative and a good passer both long and short. 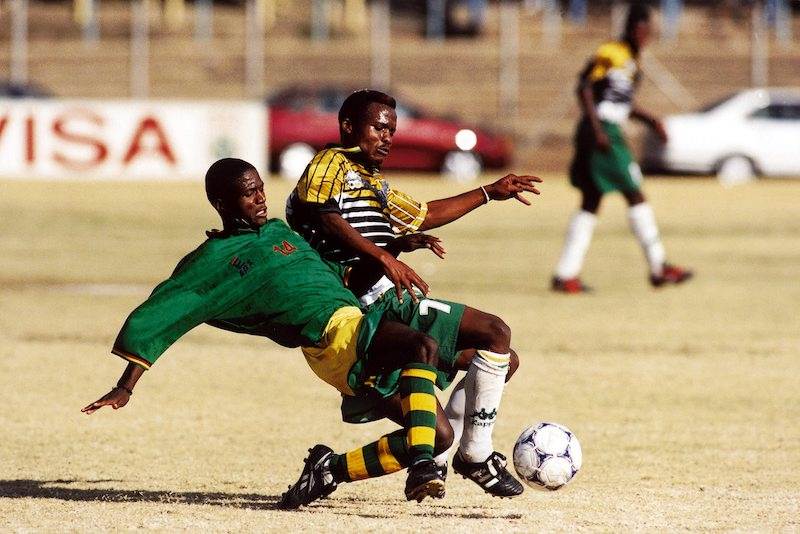 LCM - Abram Nteo - What a combination with Mbuthu! Same qualities as him and also quick in supporting the strikers, switching from attack to defence and interchanging positions. RW - Mandla Masango - Good carrier of the ball, dribbling, quick going forward and can play combinations with the strikers and score goals. LW - Stanton Fredericks - He could also take the ball forward and run at defenders, eliminating the opposition's numbers in defence therefore opening gaps in the box. Scored goals. Roving Striker - Daniel Matsau - Quick in executing of actions, supporting and supplying his co-striker, good finisher of the ball, workaholic and specialised in scoring goals. Mashaba also gave some advice about the issue of foreign players and the politics in the national team setup after a much-publicised spat between Ntseki and Bongani Zungu.

"I thought that thing left with me, the local and foreign-based players thing," Mashaba says.

"Ya we seem to take it as a good thing, that thing is not good for the national team. We drew the first game [against Nambia], that gives the technical staff another sleepless night. So the next game that is coming which was Zambia we had to make changes here and there. And we've lost. So what does it mean now?

"And another warning is that, playing abroad doesn't guarantee a player an automatic position in the Bafana Bafana. No it doesn't! Everybody has got to perform and make sure he deserves to be there.

"It is not about who you have in the team, it is about what they can do to see the team succeed. People who can improvise beyond the technical team's requirements. Because the coach and everybody they don't play football, they are sitting on the bench.

"What if they say to you, 'You must watch out those people they'll play coming to you backwards, reversing like a car.' And when that doesn't happen you will call the coach, 'Hey coach, what you told us it's not happening!' You need people to improvise.

"But my warning after all that I said, make sure as a head coach what you want to see happening, it's really what is happening.

"Don't ask here and there for advice. Your technical staff and you, you've got to sing from the same hymn book. You must be careful of people's egos as well. That's my warning to the coach.

"When things didn't go well he should be able to say we failed one, two, three. Stop scratching your head not knowing what is happening. We are going to the AFCON qualifiers now, you don't have a second chance there. If you lose the first game, it's gone, forget it."