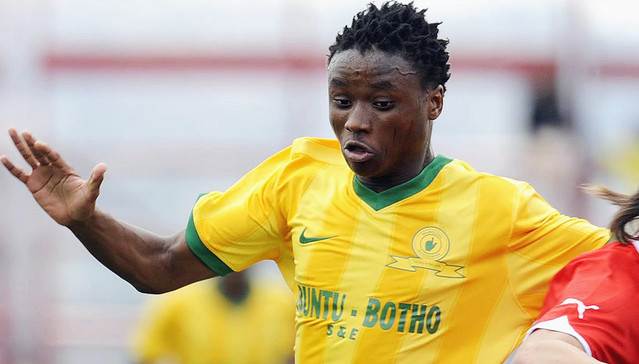 The Pinetown-born creative midfielder, who coach Pitso Mosimane has described as a future star for Sundowns, was loaned out to NFD side Leopards before the start of the current season and will return to Chloorkop in May.

Like Shozi, Tau was also loaned out by Sundowns, spending the 2015/16 campaign with Witbank Spurs, and upon his return to Sundowns at the end of that campaign, Mosimane immediately registered him in the squad and he was part of Sundowns' CAF Champions League-winning team.

Along the way winning in the Africa's elite club cup competition, Tau scored in the semi-final second leg against Zanaco FC to help the Brazilians reach the final, while he was also the only player to score in Sundowns' debut campaign in the FIFA Club World Cup in Japan, where 'Jingle's' men came back without winning a single game in the competition.

The 22-year-old Tau is now leading the line for Sundowns with six goals in 21 league matches and nine in all competitions this term, while he also recently scored for Bafana Bafana in the friendly match against Guinea-Bissau.

Shozi, who was promoted from the Sundowns academy last season following his starring performances in the Multichoice Diski Challenge, says seeing the way Tau has taken his chances encourages him to work even harder to make an impact when he returns to Sundowns next season.

"What is important when you are loaned out is the game time and that is what he's happening to me now," Shozi tells KickOff.com following the 1-1 NFD draw against leaders Thanda Royal Zulu in Wednesday's top-of-the-table clash.

"What is happening to Percy [Tau], I'm very happy for him. I grew up with him at the club's academy and seeing him playing regularly at Sundowns and doing well, I'm truly happy.

"It also encourages me to work hard. What I'll need to do going back to Sundowns is to work hard to also play regularly.

"I'm learning a lot here [at Leopards] and I'm aiming to help the team push for promotion, or else play the play-offs if it's possible, and anything else we'll see at the end of the season."

Having missed out on MDC glory last year after Sundowns' junior side were pipped to the title by Golden Arrows, Shozi, who has scored two goals in 18 matches for Leopards this season, says he was delighted to see the current crop of reserve-team players etch the club's name on the trophy as they clinched the title on the final day of the season.

"I was very happy that they [Sundowns reserve team] won the MDC and we've been trying, even when I was still there, so I'm happy that they finally won it this season," a soft-spoken Shozi adds.

"I wish next season if they can manage it, to win it again."