Cristiano Ronaldo opens up on his future Manchester United superstar Cristiano Ronaldo has broken his silence regarding his future with Portugal amid talk that he could retire from international football.

A Selecao will face North Macedonia in a crunch 2022 FIFA World Cup play-off tie on Tuesday night after securing a 3-1 win over Turkey last Thursday, when Diogo Jota, Otavio and Matheus Nunes all got on the scoresheet for Portugal.

Captain Ronaldo will be under pressure to help his nation qualify for Qatar 2022, especially as he will be in his 40s when the 2026 tournament takes place.

Scroll through the gallery above to see Portugal's all-time top five goalscorers, per Transfermarkt

If the five-time Ballon d'Or winner leads his men to victory, he will be in line to make his fifth appearance at the prestigious tournament in November 2022.

This will put him on par with Lothar Matthaus, Antonio Carbajal and Rafael Marquez, all of whom share the record for the number of World Cup tournaments participated in.

Speaking to reporters ahead of the play-off tie, Ronaldo was asked about his international future, with some believing the 2022 World Cup could be his last.

"I'm starting to see that many of you ask the same question," he said, per Portuguese newspaper Record.

"I'm the one who will decide my future, nobody else. If I feel like playing more games, if I don't feel like it, I don't. I'm the one in charge, full stop.

"I live one day at a time, tomorrow only god knows. I enjoy football and I still feel useful both at the club and at the national team.

"I will decide when I want, not when they understand fans, family or journalists.

"I have always decided my life and that is what I will continue to do."

Ronaldo also had a rallying cry for his country's supporters ahead of the North Macedonia clash.

"I urge the fans – I want hell breaking loose at Dragao [Stadium]," he added.

"I went to bed last night thinking that I want the stadium to shut down the music for our national anthem and let the fans sing it acapella to show our passion, our strength and union around the objective of reaching the World Cup.

"For us, this game is a matter of life and death. There is a responsibility to win this game. For us, also a game of our lives.

"They [North Macedonia] have surprised [opponents] in many games, but I believe they will not surprise us." Most victories by a player at the Euros - 12 Most penalties scored in one Euro tournament - 3 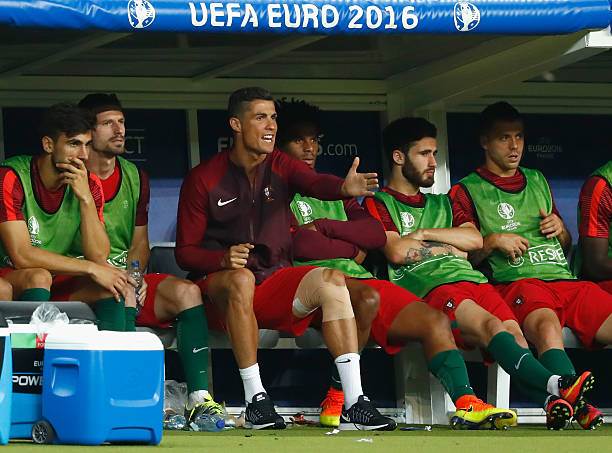 Oldest player to score for Portugal in a major tournament - 36 years, 130 days