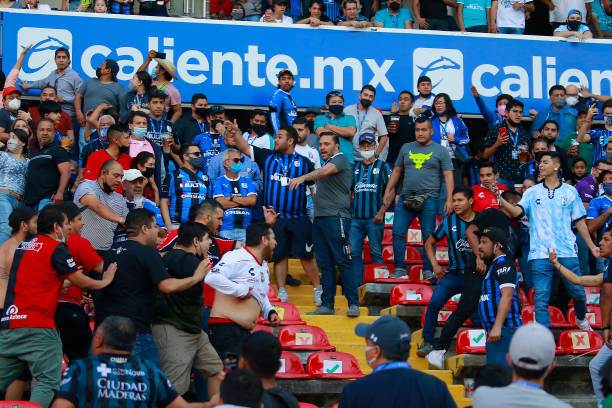 A football match in Mexico's top-flight was suspended as a fan brawl in the stands spilled onto the pitch which left many badly injured and some ending up in hospital.

During the second half of the match in North America, fans reportedly started sprinting onto the field as violence had broken out between supporters of the rival Liga MX teams Querétaro and Atlas.

With the latter having a 1-0 lead, the referee Fernando Guerrero stopped the game as hundreds began to seek safety on the field. The officials had initially hoped that the match would be able to resume but violence continued to escalate in the stands.

According to Marca, the authorities of Queretaro officially claim that 22 people were injured and 9 hospitalised, but local media believes that there is at least 17 dead after the brutal fan combat.

The world football governing body, FIFA, has released a statement where they condemned the behaviour of the fans.

“FIFA is shocked at the tragic incident that took place at La Corregidora stadium in the city of Queretaro during the fixture between Queretaro and Atlas,” the statement read.

“The violence was unacceptable and intolerable.

“FIFA joins the Mexican Football Association and Concacaf in condemning this barbaric incident and encouraging the local authorities to bring swift justice to those responsible.

“Our thoughts are with all those who suffered its consequences.

“Once again FIFA would like to stress that violence should have absolutely no place in football and we will continue working with all parties to eradicate it from our game.”