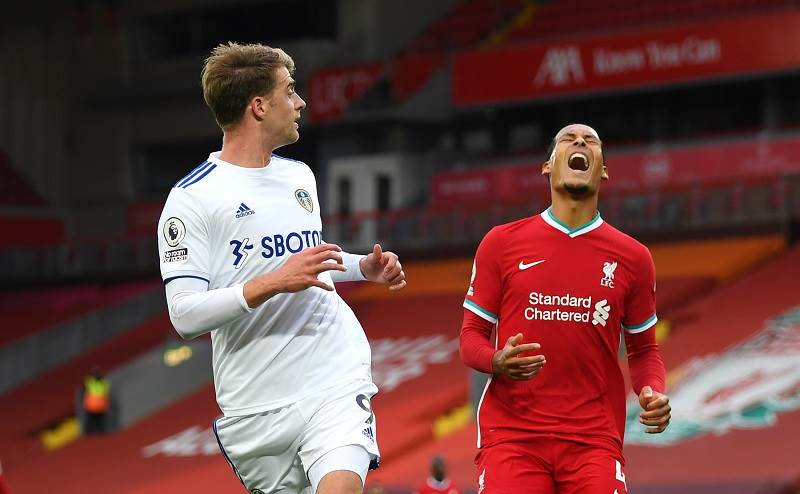 A hat-trick from Mohamed Salah led Liverpool to a thrilling 4-3 victory over Leeds United in Premier League action on Saturday evening.

Jordan Henderson earned a recall for the Reds, as Leeds, were making a return to the big time after 16 years, had record signing Rodrigo sitting on the bench.

Dubbed ‘Champions v Champions, the home side threw in the first blow four minutes in after Salah slammed home from the penalty spot following a handball in the area.

Browse through the images above to see action from Liverpool's thrilling win.

Leeds seemed to have pulled a goal back four minutes later through Helder Costa, but it was disallowed after he had strayed into an offside position.

Marcelo Bielsa’s side would indeed go level on 12 minutes after Kalvin Phillips picked out Jack Harrison, who drifted in-field from the left to smash into the near corner.

Liverpool hit back from a corner at the near post six minutes thereafter with Virgil Van Dijk using his aerial prowess to nod home amidst a grappling Leeds goalkeeper Illan Meslier.

At the other end, Van Dijk then made a poor clearance on the half-hour mark that led in Patrick Bamford, who got goal-side to pick out the bottom corner.

Liverpool were back ahead though after three minutes when Salah controlled a cutback from the back –post following an in-swinging free-kick to rattle the top corner.

The Reds missed a good chance to a fourth two minutes following halftime through Georginio Wijnaldum, who failed to beat Meslier from point-blank range.

Liverpool refreshed their midfield compartment following the 58th minute with the removal of Naby Keita and introduction of Brazilian Fabinho.

The side from Elland Road didn’t give in just as Mateusz Klich volleyed into the far corner 66 minutes in following a deft first touch off a ball from the right by Costa.

Following a nervy closing quarter, the Reds had the final say after Salah rifled home from the spot once again three minutes from time after a foul on Fabinho to break the visitors' hearts in the process.