De Bruyne: Why I would choose Ronaldo over Messi 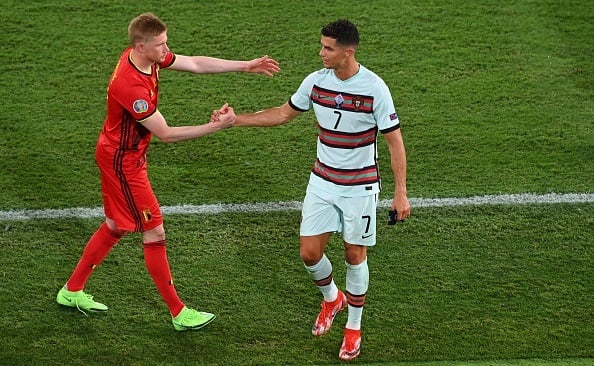 The Belgium international has got off to a productive start in the 2022/23 campaign, having already registered eight assists and one goal for the English champions across nine appearances in the Premier League and UEFA Champions League so far.

In fact, in City's 3-0 win over Wolverhampton Wanderers last weekend, the attacking midfielder set up goals for Jack Grealish and Phil Foden, in the process equalling Liverpool legend Steven Gerrard's EPL assists record (92) in 287 fewer games, according to the Daily Mail.

Seemingly very much in love with his creative role, De Bruyne has revealed that he would prefer to play alongside the Portugal international rather than the Argentina captain for one reason in particular.

"I would probably say Ronaldo because he's more of a typical striker," the 31-year-old said in interview with Wow Hydrate.

"Messi is still more of a playmaker.

"I am a playmaker, you can give me a striker."

The prospect of featuring alongside either of the two stars at the Etihad seems to have vanished after both multi-Ballon d'Or-winning superstars were linked with a move to the club in 2021 but neither joined, and the possibility appears more unlikely now given that Pep Guardiola's side signed free-scoring Norwegian sensation Erling Haaland in July this year.

"De Bruyne was De Bruyne at his best, his goal was terrific," the Irishman said.

"City are a team that's going to pull you to shreds. Kevin De Bruyne is now the Lionel Messi of what Pep [Guardiola] had at Barcelona.

"He will just take the ball everywhere and use it. He's pivotal to them."