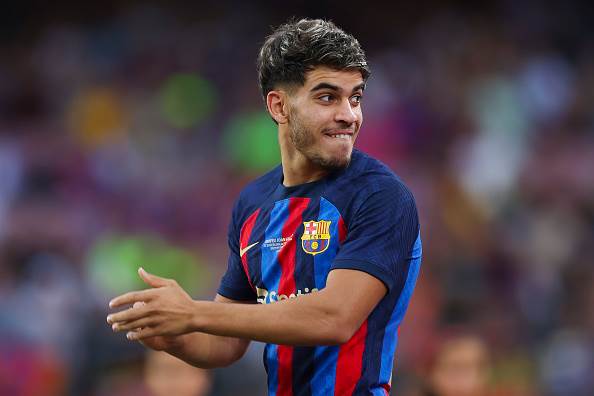 FC Barcelona are said to be close to announcing yet another departure, while five more players could reportedly still leave the club before the close of the transfer window, including Memphis Depay.

Having signed five players already, including Raphinha and Jules Kounde, the Blaugrana have been one of the busiest European clubs in the market.

The door has not only been open for arrivals, though, with the Catalans having also confirmed nine departures so far, including the permanent exits of Philippe Coutinho and Riqui Puig, as well as the loan outings of Clement Lenglet and Francisco Trincao.

Scroll through the gallery above to see six players who could leave Barca in this window, according to various reports

Next on the way out of the Camp Nou is believed to be midfielder Nico Gonzalez, who is set to join Valencia on a season-long loan deal, according to transfer expert Fabrizio Romano.

That deal is expected to be completed in the coming days and will not include an option to buy, with the aim being to get the Spaniard the game time that cannot be afforded to him by manager Xavi Hernandez after signing Franck Kessie for the team's engine room.

Forward Depay, meanwhile, is understood to be in talks over a move to Italian giants Juventus. According to various reports in Spain, the clubs are discussing a permanent two-year deal for the Dutchman, with the player believed to be only willing to accept the Bianconeri's proposal if his Barca contract is terminated to his satisfaction.

His compatriot Frenkie de Jong has been linked with an exit from the Camp Nou for well over a month now, and reports have not relented regarding his future.

The latest development in the 25-year-old's situation is that the Catalans have asked him to tear up his contract as they allege that the terms of the playmaker's latest extension, put together by the club's previous board, involve elements of criminality and are grounds for legal action against the Netherlands star.

It is also understood that Barca want De Jong to leave so that they can a free up some much-needed space on the wage bill, which will allow them to register news signings Robert Lewandowski and Kounde, among others.

According to Barca Universal, youngsters Abde Ezzalzouli, Alejandro Balde and Alex Collado could also be on their way out on loan as game time at Barca is expected to be scarce for the trio in the 2022/23 campaign.

Here are some of the players who recently left Barca