Mohamed Salah has become the first player to score on the opening weekend in five consecutive Premier League campaigns. Robert Lewandowski has now scored on the first matchday in seven consecutive Bundesliga seasons – no other player in history has achieved this. Pep Guardiola has now lost more away games against Spurs in all competitions than against any other opponent away from home (5). 15 different players made their EPL debuts in the match between Brentford and Arsenal (12 for Brentford, 3 for Arsenal), the joint-most in any EPL match. 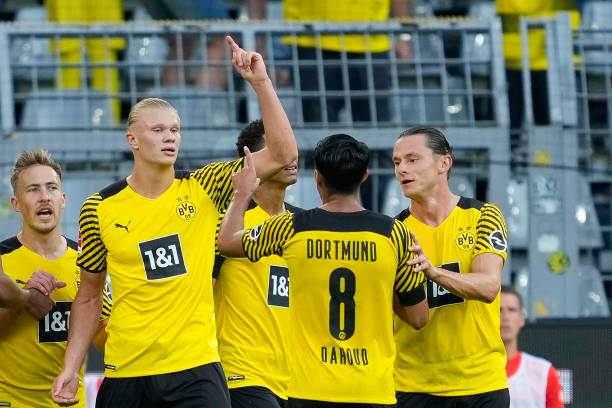 Borussia Dortmund has won on the first matchday of the Bundesliga for the seventh season in a row, equalling the record held by Bayern Munich. Borussia Dortmund have scored in each of their past 33 Bundesliga matches, setting a new club record. Mohamed Salah and Paul Pogba's impressive performances in the 2021/22 Premier League's first gameweek saw them break records, but who else wrote themselves into football history on the weekend?

The Egyptian helped Liverpool to a 3-0 victory over Norwich City at Carrow Road on Saturday, scoring once and providing two assists as Diogo Jota and Roberto Firmino scored either side of half-time.

Scroll through the gallery above to see some records that were equalled or broken in Europe over the past weekend, according to Opta Sports

The match was the 100th game across all competitions Salah has scored in for the Reds, and his goal against the Canaries means he is the only player ever to score in the opening game of five consecutive Premier League seasons.

In Manchester, meanwhile, Pogba joined an elite list of players following his sterling performance in Manchester United's 4-2 win over Leeds United on the weekend.

The French midfielder provided the assists for the goals scored by Mason Greenwood, Fred and Bruno Fernandes (twice) to become only the seventh player in English history to assist four strikes in one game.

Read: 10 transfers you missed on the weekend

The 28-year-old is also the first Red Devils player ever to achieve this, despite producing just three assists in the 26 EPL games he featured in for the Manchester club in the 2020/21 campaign.

On Saturday, Borussia Dortmund recorded a 5-2 win over Eintracht Frankfurt, breaking two club records in the process, including one for scoring at least one goal in each of their past 33 Bundesliga games – scroll through the gallery above to see some other records that were equalled or broken on the weekend!

* The statistics in the gallery are courtesy of Opta Sports.