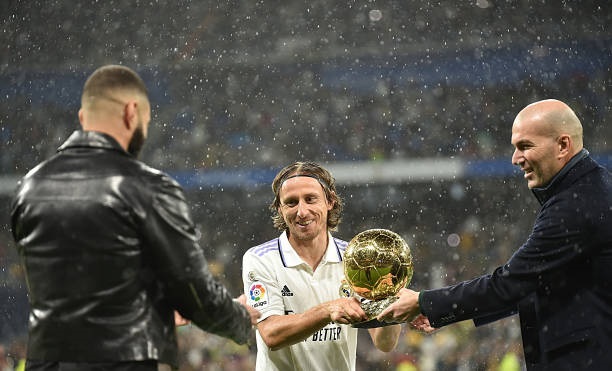 With Real Madrid reportedly planning to offload one of their Ballon d'Or winners, the player in question has now been linked with a move to Cristiano Ronaldo's Al Nassr.

The Portuguese forward reportedly became the highest-paid player in football following his move to the Middle Eastern club.

Since Al Nassr opened their cheque book for the former Manchester United superstar, a number of high-profile players have been linked with a move to the Saudi Pro League side, including the likes of Sergio Busquets and Sergio Ramos

Now, according to Spanish outlet Sport, Real Madrid duo Eden Hazard and Luka Modric are being targeted by Al Nassr.

Los Blancos are reportedly looking to make their squad younger, and want to offload players over the age of 30 in an effort to do this, with Modric and Hazard believed to be among the first older players to potentially leave.

The pair are both on high wages in Madrid so their exit would allow the team more financial room for future signings.

Despite Modric, winner of the Ballon d'Or in 2018, still being an integral figure in Carlo Ancelotti's side this season, it is said the LaLiga club is planning to sign Borussia Dortmund's Jude Bellingham as a potential replacement.

Hazard, meanwhile, has endured a tough few years at the Santiago Bernabeu, having failed to maintain a first-team role since joining for a club-record fee from Chelsea in 2019.

The Belgian's time in Madrid has been hampered by injuries, with the winger having made only 73 appearances in almost four years, leading to speculation the Spanish giants are looking to part ways with the player.