Cristiano Ronaldo 'asked' to be benched 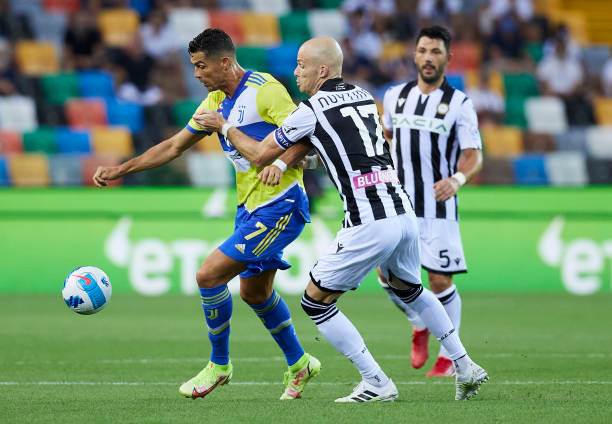 Amid much speculation around his future, the reason why Juventus forward Cristiano Ronaldo did not start in his club's 2021/22 Serie A opening fixture on Sunday has seemingly been revealed.

Manager Massimiliano Allegri started his latest league campaign with a 2-2 draw against Udinese, but there was controversy before the match began when transfer expert Fabrizio Romano claimed that the Portuguese icon had made a strange request ahead of the fixture.

The 36-year-old, who also did not feature in a friendly for Juve last week, had made a personal plea to not start the game as he looks to "find a solution on the market" over the next few days, according to Romano.

The forward, who came on for the last 30 minutes against Udinese and had a winner disallowed in the 94th minute for offside, is set to become a free agent in July 2022 and it has been suggested that the Bianconeri will not look to extend his stay, but the latest reports appear to indicate that Ronaldo would like to leave in this transfer window.

Read: Juve throw away two-goal lead in Serie A

The Serie A side's vice-president Pavel Nedved insisted after the match that there was nothing to his benching, however.

"We've decided together with Ronaldo. It's normal. Ronaldo will 100% stay," the former Bianconeri star told DAZN.

It is further claimed that no club has made an official bid for the six-time Ballon d'Or winner just yet.

Only a small group of teams in Europe can afford to sign Ronaldo, with Real Madrid, Manchester City, Manchester United and Paris Saint-Germain having been linked with a move for the forward in recent weeks. Pedro – AS Roma to Lazio Tammy Abraham – Chelsea to AS Roma