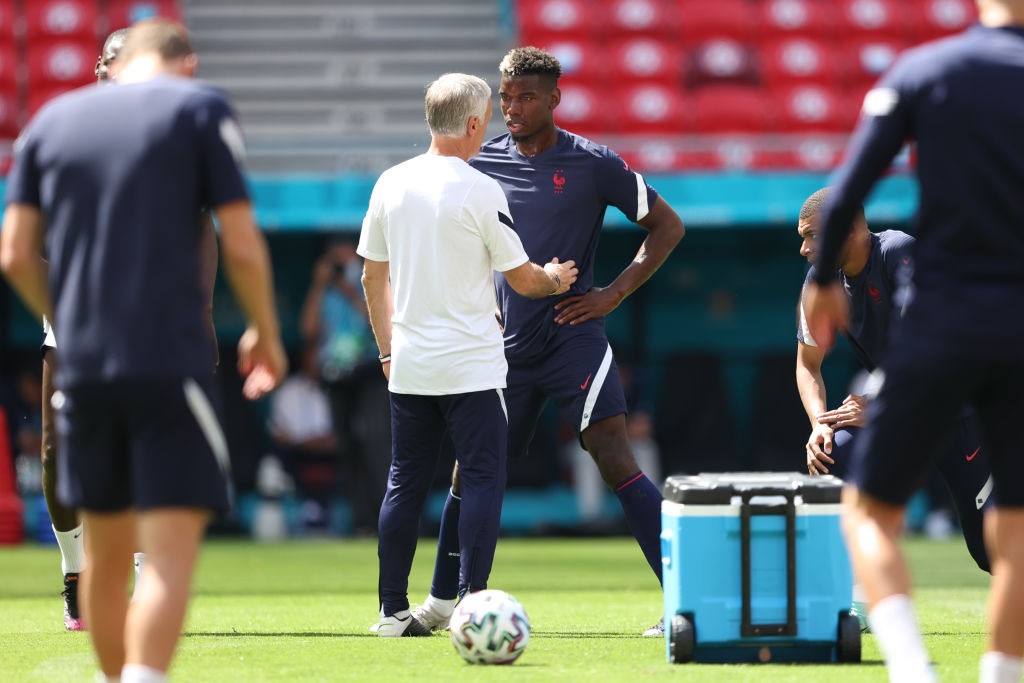 BUDAPEST, HUNGARY - JUNE 18: Didier Deschamps, Head Coach of France speaks with Paul Pogba of France during the France Training Session ahead of the UEFA Euro 2020 Championship Group F match between Hungary and France at Puskas Arena on June 18, 2021 in Budapest, Hungary. (Photo by Alex Pantling/Getty Images)

France head coach Didier Deschamps has offered some insight about whether or not Paul Pogba could make the cut for the FIFA World Cup in November.

The former Manchester United midfielder picked up an injury during pre-season while in action for Juventus during their of the United States.

The 29-year-old then underwent surgery on the knee injury and now faces a battle against time to be fit for the World Cup in November.

Read: Evra: I wish I represented Senegal over France

Deschamps has maintained that Pogba will only be called up if he is fit to play, as he will not take any risks.

“I talk regularly with Paul, his recovery is going well… He will do everything to come back as soon as possible but he will not take any risks either," Deschamps said, as per GFFN.

"Today, no one can say “yes” or “no”. The number one priority is that he recovers fully. I have never taken a player [to a tournament] who was not fully recovered. He’s won’t be there just to amuse the gallery. "

The players called up to the France team are fit to be on the pitch and Paul won’t come if he’s not fit. If he’s just coming for the sake of it, he doesn’t want that, and neither do I. It’s inconceivable.”

When asked about the alleged witch doctor incident with Pogba and Kylian Mbappe, Deschamps added, "Obviously, I’ve discussed it with Paul but do not ask me to intervene over stories that could have been created. Today, justice is doing its job.”

Next on KickOff
Pogba saga continues: Mathias in police custody