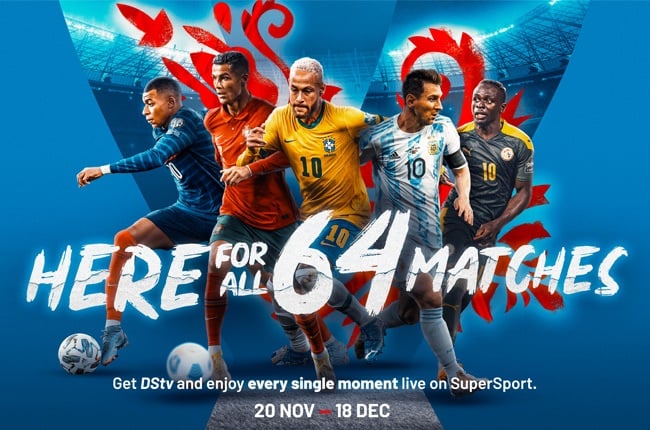 SuperSport is the only platform in Africa where football fans can enjoy all 64 matches from the 2022 FIFA World Cup, live and in prime time, with highlights, historical footage and news updates – and now, in streaming 4K, without a satellite dish.

SuperSport will be introducing two 4K channels (DStv Channel 216 & 217) - the first in the DStv stable - that will cover all 64 World Cup matches. To enjoy this made-for-sport level of detail, viewers will need an Explora Ultra decoder or DStv Streama streaming device, connected to a 4K television with the supplied HDMI cable, coupled with a DStv Premium, Compact Plus or Compact subscription. Even without 4K screens, viewers will experience High-Definition viewing as standard with the Explora, Explora Ultra or Streama, with all the detail and quality to go alongside one of the most anticipated World Cups of recent years. SuperSport’s offering will also include World Cup action for Access and Family package subscribers (via SuperSport LaLiga, DStv Channel 204). 19 group matches, four round-of-16 matches, two quarterfinals, both semi-finals, the third-place playoff and the final will be broadcast on the channel.

The pairing of 4K picture and the DStv Streama is an exciting one, meaning that football fans can enjoy all 64 games in 4K quality without a satellite dish and installation, for the first time ever. The DStv Streama is a TV streaming box that delivers content from DStv and a variety of other apps such as Showmax, Netflix, Disney+, Prime Video, YouTube and YouTube kids to a compatible TV, via a fast, stable internet connection.

DStv customers are now able to access that connectivity with the company too, via DStv Internet, which offers uncapped, unshaped fibre connectivity to maximize the features of the Explora and Explora Ultra, enable the Streama - and connect users to the world.

SuperSport will complement its coverage of all 64 World Cup matches with expert build-ups and summaries, plus state-of-the-art graphics and magazine shows, including training and behind-the-scenes footage. SuperSport has crews on hand in Qatar to capture breaking news, with a particular focus on Africa's five participants: Cameroon, Morocco, Tunisia, Ghana, and Senegal. SuperSport's World Cup broadcasts will also be available in multiple languages, customized per region:

While the 4K quality digital stream will be a first, there’s also plenty of other digital activity around the World Cup. SuperSport will be partnering with a number of global social platforms as well as FIFA’s team to take fans inside the tournament like never before. Coverage will extend from the dressing room, all the way to behind-the-scenes at SuperSport’s Randburg studio operation.

Whether you’re mad about Messi or Benzema; root for Ronaldo or Rodrygo or are a sucker for Saka or Suárez, the best way to catch all your favourites, live and in 4K with all the benefits – is with DStv.

Read more on:
dstvfifa world cuphow to find and watch the fifa wc in 4k