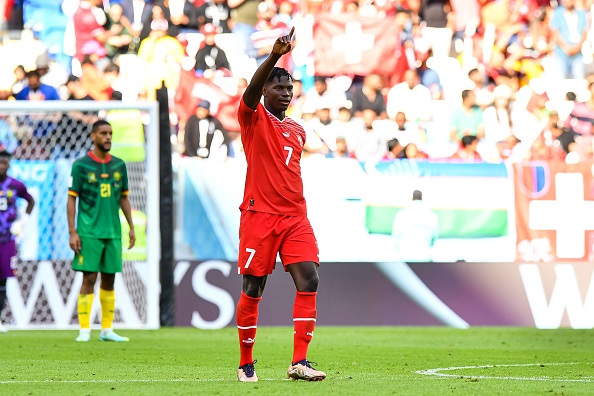 After scoring against Cameroon in the 2022 FIFA World Cup on Thursday afternoon, Switzerland striker Breel Embolo, who was born in the central African country, made unique tournament history.

The Swiss claimed all three points from their Group G encounter against the Indomitable Lions on Thursday, with Borussia Monchengladbach forward Embolo's goal sealing the 1-0 win for his adopted nation.

The 25-year-old, born in Yaounde, found the back of the net against his country of birth in the 48th minute before holding his hands up as he refused to celebrate what would be a match-winning effort. According to Spanish football expert Alexis Martin-Tamayo, Embolo has become the first player in the history of the World Cup to score against the nation he is initially from, a goal that leaves Cameroon with an uphill climb to secure qualification to the knockout stage.

Rigobert Song's side will face Serbia next, before taking on five-time world champions Brazil in their final match in Group G.

Embolo made his debut for Switzerland's senior team in 2015, and has since amassed an impressive 61 appearances in all competitions.